Snow Up to Her Eyeballs (Molly's that is!)


After surprising me by coming home earlier than expected this week, Duane went and also surprised me with that sweet blog. Awwww! Now we've been "working" in the snow today... packing wood, shoveling snow, etc. So much fun to have Duane home for an extra day!

As we've been working so hard to cut back on all extras lately, it was a special treat when Duane took me to a movie last night! It was actually a movie screening that was for free, and we got to see some of the actors and directors, etc in person. They shared some great testimonies about the process of making the movie, as well as those who have been affected even in the screening process. You should definitely keep your eye out for Loving the Bad Man, co-starring Stephen Baldwin.
Today's blog will hafta be brief, but I wanted to at least check in! I'm off to go sample some of the ham and bean soup that Duane made yesterday! Did I mention I love my husband? :)
Posted by CoraET at 12:52 PM No comments:

A Wonder Woman for me

Hi gang! Duane here, I get to 'blog' for the first time as well.  For those of you who know me, you know that I like to write stories of adventure, humor, with maybe a little bit of  a heart tug.  Writing a blog, which is my beloved wife's idea, is not exactly my 'thing'.  Just look at my facebook page to see when the last time I logged on and updated was!  However, I do need to say a few things about this woman to whom I am married and to whom I am grateful to my God and beloved Saviour, as He is the one who gave such a woman as this to me.

She really doesn't realize how much of a blessing she is to me.  I know that she is proud of me and loves me as it shows in her writings about me.  But here is the thing: I just drive a truck to make make a living, pay our bills, and have a house in which to stay warm in.  She has all of the responsibility.  She works on the budget, keeps the house clean, organizes the house, is the director of a VERY busy chapter of CEF, baby sits this big kid when he comes home from work at the end of the week, and is my best friend and beloved wife. I wouldn't have her job for anything!  What a heavy load of responsibility!!

So, while I spend my time sitting behind a steering wheel, listening to pod casts of  John McArthur and R.C. Sproul on my iPod, I pray for her. i.e.: her health, sanity, her wisdom, organizational skills, heart attitude, life attitude, and for patience to put up with a grouchy old curmudgeon like me.  I still look at her in amazement and wonder what she ever saw in me.  My running joke with my friends is still, "She has great taste in men ... just not the best eye sight!"  I love this woman, with all that I am.  She is my 'Wonder Woman' and I am so proud to call her my wife and best friend.

"Lord, please bless the woman you have blessed me with.  Please let her know how much she means to me and how much I love her, her heart, spirit, and beauty--both inside and outside.  Help me to be the man you want me to be so I can be the man she needs me to be.  And may You receive all of the glory, praise and honor."
Posted by CoraET at 11:29 AM No comments:

Let's all go to the Races!

So I got to go to the races yesterday: Lana and Kage Raber had been training for quite a while now, and finally got to run the 5k at the local walk/run. So fun to watch "little" Kage press through when the going got tough.

I was just glad it wasn't ME running! :) Great job guys!
Posted by CoraET at 2:16 PM No comments:

First Tale of the Tuckers, featuring "A Financial Mandate"

It's Saturday morning as I write, and Duane is on the road to somewhere warm. It's snowing, and I'm supposed to be doing laundry and cleaning our office, so it seems like a REALLY good time to blog a little bit.  Nice and cozy doncha know. :)
So I'm not sure where all this is gonna go as a blog, but as a CEF director, newly married to a truck driver with more than a few years of experience, enjoying the challenge of trying to be a good wife, housekeeper, cook for someone besides myself, partner in the money management office of the Tucker Coorporation, and "mom" to a selfish mostly-deaf shaggy dog, I figure there can be no shortage of SOMETHING to talk about. The question is whether it'll be something you want to read about! lol I'll warn you that when laundry awaits as an alternative, I start to get diarrhea of the keyboard in a hurry!
I figure that readers or no, I'm going to try to keep up with this blog for the sake of accountability. I figure that most Friday mornings will be a good time to check in, but with Duane’s fluxuating schedule, that may change from week to week. At least that sounds like a good thing on which to blame my lack of self-discipline! 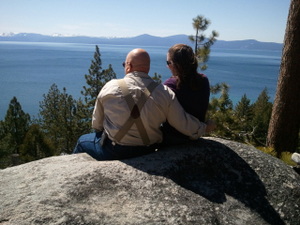 A Wee Bit About Us: Duane and Cora Tucker

Married in September, 2010, we're not your "normal" couple, both in age difference (21 years) and in character. And by character, I mean Duane IS a character. Anyone who knows Duane knows that the party starts when he shows up. Even though I'll be doing most (if not all) of the blogging, he rubs off on me enough that I'm sure you'll see plenty of him on these pages too. His sense of humor and gentle, servant spirit drew me to him and he just oozes with love for his family.

Meanwhile, I'm sweet, demure, never do anything crazy, and just your general wall-flower. And a pretty good liar too... at least as far as the last sentence goes :) Having been on 4 continents, 10+ countries, and 32 states, I love to travel, but now I love to travel with my favorite man in the semi he drives. I've been known to color my hair blue for a day, get tattoos (temporary), go ziplining hundreds of feet in the air, and to belt out my favorite tunes. If that ain't crazy enough for you, I survived growing up with three little brothers, and a sister.